I always knew that using a name like “arabica” for a cafe in an area predominantly occupied by Arabs would be a winner. In fact when I was debating whether to open cafe in Cape Town or Dubai back in 2009, the name I had tried to approach potential investors for Dubai was… “Cafe Arabica”. I thought back then and it has proven now as you will see in a few lines below that people will resonate well with an establishment that recognises their identity and their pace in the World – in this case, the world of coffee. So, now we have here a new brand,  %Arabica, which incidentally is Japanese – with their first coffee shop in Kyoto and now expanding to the Gulf, venturing into the most avant grade venue of the Arab world, Dubai and more specifically in the largest mall in the World, Dubai Mall.

I had already heard of this brand about a year ago, when they liked one of my coffee pics on Instagram and then I found out that they were going to open a coffee shop at the Dubai Mall in May 2016 – this seemed to have been postponed until September 2016 and so I knew that once given the opportunity to visit Dubai again, then I would head there, which is what I did in early February.

Located downstairs, just around the corner from the aquarium in Dubai Mall – thus is important because the mall is huge, and on the way to the Souk, opposite Sacoor Brothers is Arabica%.

As you enter, they’ve tried to escape the typical chain mall coffee shop feeling with cold decor and dotted place with coffee bean sacks, brown communal tables and chairs to give you that kind of authentic feel, alluding to their artisanal vibe – we are serious about coffee and if you are looking for Starbuck, head right back out. 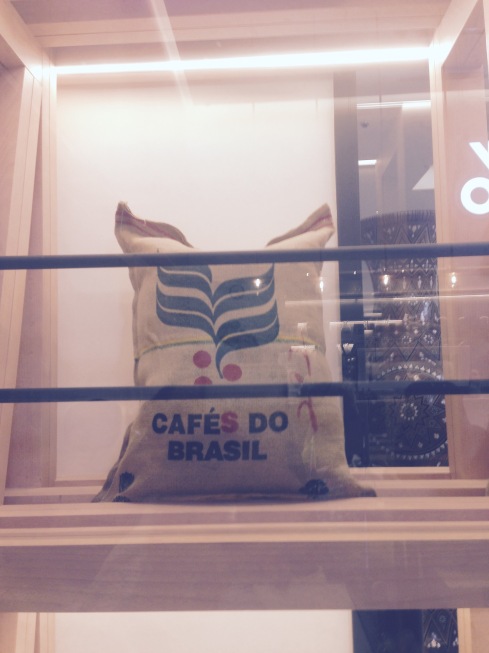 You are prompted to order with a coffee menu, which impatient customers ignore and just ask for “a Latte”. There menu is impressive – they have their house blends but also some special 90+ beans, which will set you back $20 or more for a cup. However, although I think the is great for coffee lovers like me, it may be wise if they had more experienced staff on hand to explain why this latte or filter brew costs $5 and this one costs upwards of $20. I know “geisha” and 90+ coffees are expensive due to their taste profiles, rarity and relatively low production, but for someone just making the conversion from mass style chains to speciality coffee, they need to know that this isn’t just another gimmick.

On that last point, when I placed my order, I decided to go off the list and ask for a Cortado, coupled with some questions on bean origin. I hasten to add a proviso – if someone like me walks into a speciality coffee shop and see all the gadgets and understand all the coffee language, then my expectations are raised in that I expect the staff to be able to handle some basic questions. I did hesitate however on asking them to adjust the brew and pressure gauges like I usually do at Balthasar (Vienna), but that was only because the place was quite busy – my point about the word “Arabica”. On hearing that I wasn’t the typical customer, the head barista,Yash (who I found out later was formerly of Common Grounds, Mall of Emirates and UAE aeropress champion) decided that he would attend to me. During which time we briefly chatted about their focus and about his background and mine.

On the clientele, it was predominantly locals, Emiratis, dotted with passer byes and coffee aficionados judging by their orders.

After my cup, I decided to walk over and ask some more questions about their coffee, roast profiles etc (I’m sure if my wife was with me, her eyes would have rolled up, followed by a  sigh), but yet again it was Yash to the rescue. After convincing me to buy their house blend which is dark roasted (I am usually not a fan of dark roasted oily beans) and offering me a 90+ espresso shot, I bought a bag of beans, exchanged instagram addresses and was on my way.

In summary, Arabica is a welcome addition to Dubai Mall, which although gigantic, I’ve managed to become accustomed to getting around it without too much difficulty. I’m loving the concept that people are taking their coffee seriously and that even though their many customers might not know it up front, this is a small step in changing peoples perception of coffee. You no longer have to drive out into industrial complexes to get coffee and for tourists like me who don’t have easy access to road transportation, it is great to know that by using the Dubai Metro to the largest mall in the World, you don’t have to suffer with chain coffee but can get a good cuppa, even up till midnight – yes! they close at midnight – now this has to be one of the very few places in the World you can get speciality coffee at close to midnight. The jury might still be out on my “best coffee shop in a mall” award, recently given to Common Grounds (Mall of Emirates – see here), but I think Arabica could be a good contender and will fall in second for now. Nevertheless they are planning a massive expansion in 2017, with new shops planned for the whole Gulf area, Germany, France, USA and even England, so watch out for them.

Well done Arabica for the name and concept and I look forward to visiting many times when I visit Dubai insha’allah.